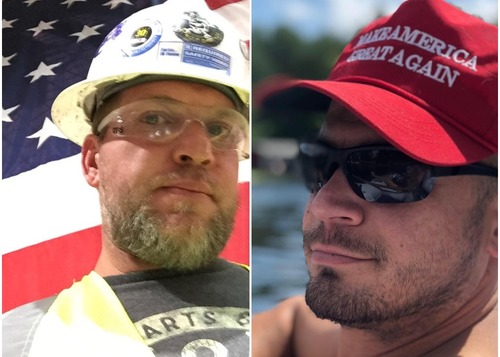 This repost from March 20 is the fifth in a daily countdown of 10 articles from this year. Links to earlier ones are at the end.

Macomb County has done it again.

The county made national news in late March for its far-right haters who engage in all forms of white supremacy.

On March 18, federal prosecutors announced that two more men – Daniel Herendeen, 43, of Chesterfield Township and Robert Schornak, 39, of Roseville – were arrested and charged for participation in the violent insurrection at the U.S. Capitol in January.

They join James Mels, 56, of Shelby Township who was recently arrested and told federal investigators he traveled to Washington with 11 other "Patriots" to block the certification of Donald Trump’s election loss.

That’s not a surprise in a county where Confederate flags fly and Dixie symbols are common back-window decorations on pickup trucks. Periodically, racist vandals spray paint swastikas or the N-word on Black people’s property.

White supremacy of all kinds

Macomb is home to an increasingly brazen brand of white supremacy – one that includes racial discrimination, Islamophobia, homophobia, xenophobia and misogyny.

They’re part of the clan.

The evidence against them includes Facebook messages indicating that they were trying to round up like-minded buddies prior to the Jan. 6 attack who would participate in the insurrection.

Over the past five years, the ugly incidents just keep piling up. But no elected officials in Macomb County seem willing to take a stand against this behavior.

Last September, a Black couple’s house in Warren that featured a Black Lives Matter poster was attacked. Gunshots were fired into their home, their vehicles' tires slashed, a brick thrown through their front window and racist threats written on their vehicles.

The case garnered national attention and the eventual suspect, a 24-year-old white male, Michael Frederick, admitted to the crimes, which in Michigan are labeled “ethnic intimidation,” not a hate crime.

At a press conference, Warren Mayor Jim Fouts indignantly said the incident should be called “racist terrorism.” It’s doubtful his remarks had any impact, as he has been caught on tape using the N-word and referring to Blacks as chimpanzees.

In June, Shelby Township Police Chief Robert Shelide was found to have created a phony Facebook account to attack Black Lives Matter protesters as “barbarians," "wild savages," and "subhumans" who belonged in body bags. Despite a public uproar, he was suspended for 30 days rather than being fired.

A 2020 congressional candidate from Harrison Township, Doug Slocum, praised the Proud Boys, a hate group, for attending an event to boost his campaign. No authorities spoke out against the social media post by Slocum, a former Selfridge Air National Guard Base commander. But numerous right-wing trolls on Facebook brashly insisted that the Proud Boys were unfairly portrayed as violent.

However, in recent reports, evidence was cited that leaders of the all-male group assembled and organized a mob of about 100 Proud Boys to breach the Capitol on Jan. 6.

In June 2018 the Southeast Michigan Tea Party wanted to hold a meeting featuring far-right media darling Laura Loomer, who was pushing conspiracy theories that the Las Vegas mass shooting was actually the work of ISIS. The location they chose for the gathering was in Utica.

The 2018 celebration of Black History Month was marred when the famed Tuskegee Airmen, the African-American fighter pilots of World War II, were forced to cancel an appearance at Warren City Hall due to “disturbing phone calls” aimed at disrupting the gathering.

A month later, when infamous extremist Richard Spencer scheduled a speech at Michigan State University, he also organized two banquet-style parties for fellow right-wingers. The locations for these two bashes, which were later cancelled due to police concerns about security, were chosen about 100 miles away from MSU – in Warren and Sterling Heights.

Sterling Heights has emerged in recent years as perhaps the epicenter of Macomb’s vitriolic discrimination agenda.

The city passed, then quickly abandoned, an ordinance to protect the civil rights of the LGBTQ community. The public pressure the city council faced was similar to the far-right outrage that led to protests and a city lawsuit to stop the construction of a mosque in the community.

The leader of this movement is a perennial candidate for office, Paul Smith. Several years ago, Smith fantasized about violently killing Muslims: “Let ‘em fill it (a mosque) up with 400,000 rag head Muslims,” he said in an email message to supporters. “Then we can crash a radio control 747 into it and roast the bastards.”

One of Smith’s closest allies in the past, another routine candidate, Jazmine Early, has proposed that Sterling Heights establish an assimilation committee that would determine which immigrants would be allowed to live in the city, while banning all Muslim refugees.

Who’s going to stop this? The Macomb County Prosecutor’s Office? The previous prosecutor was a crook; the current prosecutor has a reputation as a misogynist and sexual harasser.

If you think the public will rise up, think again. Smith, the guy who wants to roast Muslims, who advocated for the beheading of Barack Obama, the bigot who was removed by police from a Sterling Heights City Council meeting for threatening behavior – yeah, that guy – he’s the same guy who almost won a state House seat in November 2020.

10. A Detroit judge gave a drug dealer a second chance. This year he began practicing law.