A group of five local journalists and two organizations have signed a letter to the Michigan Press Association, asking for action to be taken against the Grosse Pointe News, and most recent publisher, John Minnis, a member of the MPA board of directors. The paper and Minnis, the letter reads, have "no place at the MPA table." 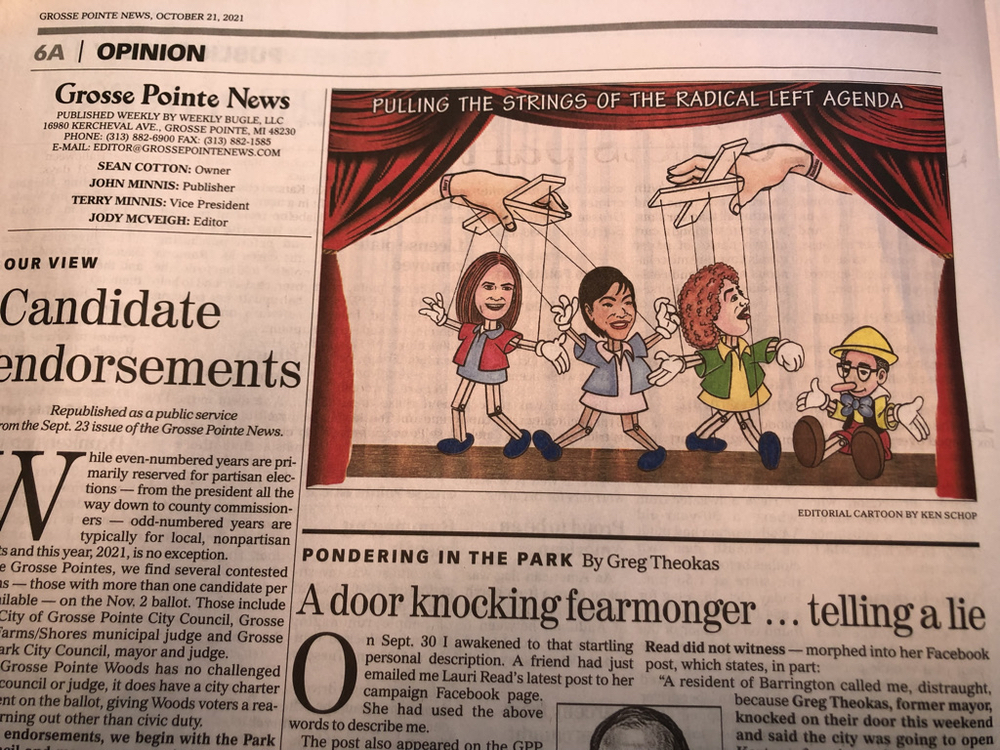 The move was organized by an individual who said they were acting on behalf of residents, frustrated by what they say is a sharp new direction for the weekly, taken since its sale to Sean Cotton, son of former owners of Meridian Health, now billionaires. The letter claims “the publisher, owner, and outlet have employed a malicious pattern of unethical journalism and an unwillingness to comply with even the most basic of journalistic standards.”

The letter is signed by journalists Bill Proctor, Lou Mleczko, Bill McGraw, Jack Kresnak and Kathy Ryan, and co-signed by the Grosse Pointes & Harper Woods NAACP and the Council of Baptist Pastors of Detroit & Vicinity.

Mleczko is a resident of Grosse Pointe Park. McGraw (a co-founder of Deadline Detroit), Proctor and Kresnak do not live in the Pointes. Ryan, a former reporter for the Grosse Pointe News, was a longtime resident of the Park who recently moved to St. Clair Shores.

As Deadline Detroit reported last fall, under Cotton’s ownership the Grosse Pointe News has transitioned from a sleepy weekly to one sharply critical of some officeholders, school officials and others, in both the editorial pages and in news coverage. Under the tagline of “analysis,” one reporter, Brad Lindberg, has written lengthy, oddly framed attacks on select individuals, including private citizens. A recent one compares and contrasts remarks made about President Biden’s Build Back Better agenda by Louisiana Rep. Steve Scalise and Grosse Pointe Farms City Council member Neil Sroka, apparently because Sroka works as a spokesman for a group that advocates paid leave for American workers.

“It’s shocking how the Cottons have turned a long-time community newspaper into a family weapon, with no regard for journalism ethics and tradition. I hope the MPA does the right thing,” said McGraw, a longtime reporter and columnist for the Detroit Free Press now working on a book project.

The letter to the MPA reviews multiple cases where the News ran “single-source stories and failed to seek balance by getting the other side, and reported inaccurate information.” It also reproduces captured screen shots of Cotton’s Facebook comments, including one boasting of feeling “pretty damn good” after a resident asks, “How does it feel to have bought an election?”

It goes on to ask that the MPA board terminate the Grosse Pointe News’ membership in the MPA for violating the group’s bylaws, which include, “to promote and maintain a high standard of ethics in the newspaper profession” and “to defend free speech, to promote open and responsive government and to foster an informed citizenry.”

Cotton responded to Deadline Detroit in an email, which read: “I am very proud of my ownership of the GP News and strongly support the staff in their pursuit of the truth in their reporting, in particular John Minnis who leads the paper with the highest integrity, and am especially proud with today’s news where we were awarded our division’s Michigan Newspaper of the Year in the MPA’s Better Newspaper Contest; and, in response specifically to the habitual disparagers of free thought and ideas (those who signed the letter and those that falsely threatened libel in order to muzzle opinions and ideals that differ from their own), I believe this quote by President Barack Obama to be on point, “We have to uphold a free press and freedom of speech, because in the end, lies and misinformation are no match for the truth.”

Minnis, the MPA board member, recently announced his retirement from the paper and is currently in Florida.

Jim Tarrant, executive director of the MPA, said only that the matter would be handled according to the organization’s bylaws, and that it would have no other comment.

Ryan, the former staffer who signed the letter, predicted it would have no effect, but signed because, “Somebody was finally saying something. It’s the only recourse at that point.”

She retired from the News staff four years ago, well before Cotton got involved, describing the weekly as once “a fine little community paper. Now, it’s a company-town paper.” But, she added, “The powers that be think they are above it all. They’re laughing at it.”