Robert Vlasic, Who Made Detroit Business into Iconic National Brand, Dies at 96 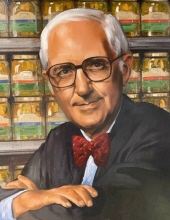 Robert Vlasic, who expanded his family's Vlasic pickle business on Detroit's east side into an iconic national brand, died of natural causes at home on Sunday. He was 96.

The Bloomfield Hills resident, the father of five sons, sold the company to Campbell Soup in 1978 for $33 million. He joined the board of directors and served as its chairman from 1988-93.

He always remained an entrepreneur at heart, founding technology companies and other ventures, while also taking leadership roles on the boards of Henry Ford Hospital and Cranbrook Educational Community, and as a member of the finance council of the Catholic Archdiocese of Detroit.

"He had a dry sense of humor but he was a no-nonsense kind of guy," Paul Vlasic, his youngest son and chairman of the Vlasic Group, an investment management company in Bloomfield Hills, tells Susan Tompor of the Detroit Free Press.

He graduated from Culver Military Academy in Indiana and earned a degree in engineering from the University of Michigan. After serving in the U.S. Navy, he met Nancy Reuter. They married on Nov. 11, 1950 and had five sons. She passed in 2016.

He earned his bachelor’s degree in industrial and mechanical engineering in 1949 from the University of Michigan. He went on to work in the family food business where the Vlasic name became synonymous with pickles. His father Joseph founded and sold several food distribution companies before starting Vlasic Foods Inc. in 1959. He assumed the top management post in the family business in 1963.

"He did everything with intention. He was very focused on his family, the Catholic Church and the business," his youngest son told the Freep. "He would go to the office 365 days a year -- Christmas, Easter, Thanksgiving," Vlasic said, even though he might only stay a few hours at work on holidays."