The artist poses in front of "Searching for Cicadas," a 2021 oil canvas. Six more photos are below. (Photos: Library Street Collective)

Paul Verdell, 31, recently got a good-news email that "really surprised me," the 31-year-old Detroit artist tells the Free Press. He's chosen, the message said, to join 15 other creators at an extended work-and-live program in Dakar, the capital of Senegal. 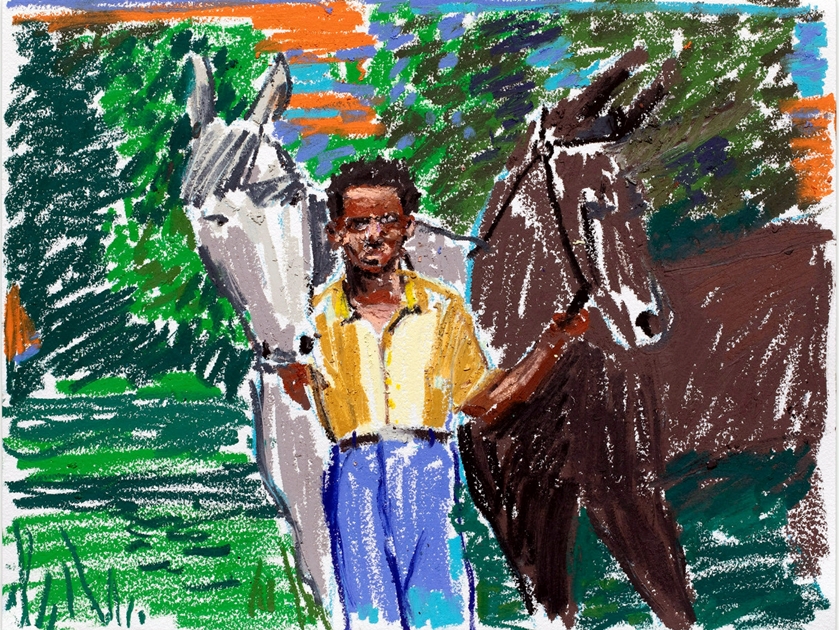 "Whisperer," a 2021 work in oil pastels, imagines his paternal great-grandfather leading two horses in the lush Florida area where that ancestor lived.

Artists stay at Black Rock anywhere from one to three months. ... Opportunities are provided to attend regional events, learn from and collaborate with local artists and designers, and engage with Dakar’s cultural scene.

Of this season’s 16 selected artists, Verdell is one of only five from the United States. ... "I was genuinely shocked [to get in] because I had just gotten rejected for a bunch of other things," he said. "That's just the territory. Every artist gets rejected, so this one really surprised me."

The Detroiter -- who has a light-filled, brick-lined Hamtramck studio -- uses oil paint, oil pastels and crayons for portraits, landscapes, and still lifes. He's from Long Beach, Calif., and earned a 2018 fine arts degree from Bowling Green State University in Ohio. He then lived in Toledo until moving here last summer.

Verdell was part of 2020 group show at Library Street Collective in The Belt, and had two solo exhibitions there last year. The downtown Detroit gallery plans to display his latest works in September, shortly before he heads to Africa's western coast.

The Black Rock experience, named for volcanic stones on Senegal's shores, includes room and board and is intended "to support new artistic creation through collaborative exchange and to incite change in the global discourse about what Africa means today," its site says. The first Detroiter accepted was Darryl DeAngelo Terrell, a Detroit photographer and videographer who had a 2021 residency.

Spending October at the distant retreat "will help me expand my mind and see things differently," Verdell says in his recent interview.

Images and quotes below are from a Library Street Collective multimedia presentation about the artist it represents.

"Verdell sometimes turns his brush to still lifes. He has a personal love for growing and tending to houseplants, and florals catch his eye when he is out on runs in the neighborhood surrounding his studio."

Portraits of three friends -- Cyd, Jay and Darryl DeAngelo Terrell (right) -- who did sittings. "Verdell enjoys having other artists sit as models for his drawings and paintings, as they are often so familiar with the process of working from a live figue and the importance of patience and vulnerability in a sitter. ... After the sitting, he builds the work further through memory and intuition or may reference images taken during the session."

"Searching for Cicadas" shows a man high in the trees of the Florida Everglades, based on a black-and-white photo of his maternal great-grandfather. ... The work was painted during the summer of 2021, when cicadas emerged across the US after 17 years underground. ... Verdell interprets his past through a lens of the present."