Cruising the Great Lakes on a luxury ship: It's fancy aboard, but boring ashore

Cruise ships are (mostly) new to the Great Lakes this summer. They're also expensive, luxurious, and coping with conditions they don't generally have in more well-known climes -- shallow harbors, boring scenery, boring ports of call. 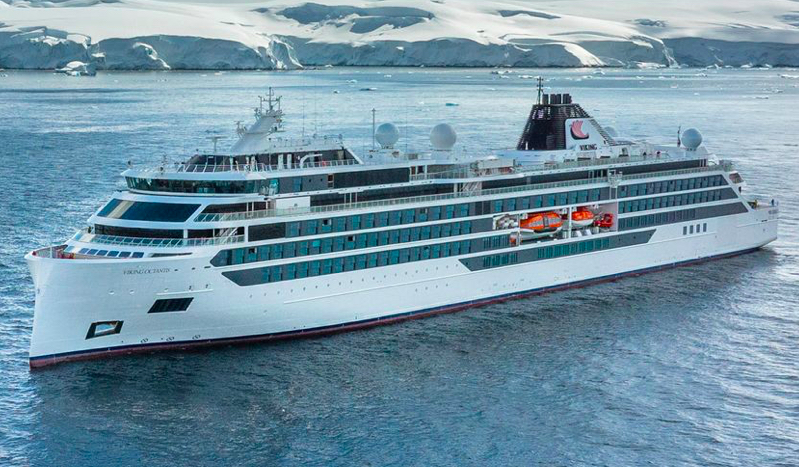 The Viking Octantis, most decidedly not in the Great Lakes (Company photo)

That's the takeaway from Francis X. Donnelly's project on cruising in the lakes in 2022, having drawn the enviable assignment of going aboard and ashore for the Detroit News.

With the dateline Aboard the Viking Octantis, Donnelly writes:

Cruise lines have discovered the Great Lakes. Its vessels have sailed the waterways on and off since the 1920s, but not like this year. The Octantis is one of nine cruise ships on the lakes this summer, four for the first time.

A seven-day journey from Milwaukee to Thunder Bay in Ontario wasn’t one trip but two. It was European elegance meeting Midwest humility. It was one excursion on the ship and a different one off it. It was Dorothy leaving technicolor Oz and arriving in black-and-white Kansas.

The cruise traveled upbound through Lake Michigan, across northern Lake Huron to Georgian Bay (where three of five port calls took place, two of them 10 miles apart), then back northwesterly through the Soo Locks and across Lake Superior to its final destination. The guides apologized that there wasn't much to do ashore. Even Mackinac Island couldn't compare to the white-glove service aboard the Octantis.

But few passengers seemed disappointed, and raved about the experience of traveling freshwater lakes, especially before the novelty of being among the first passengers on a luxury liner to do so wore off. In some ports, they were greeted by locals who gathered near the docks and in kayaks and smaller boats to welcome them. The passengers, from the look of Nic Antaya's photos, were mostly older, white and well-to-do. Donnelly explains:

Viking sees itself as an anti-cruise-ship cruise ship, and prides itself on what it isn’t. There were no kids and no karaoke, no waterslide and no Electric Slide. It offered a more refined cruise without the cheese. A younger person might say without the fun.

Viking tries to appeal to the academic-minded. It had lectures, workshops, documentaries, presentations and guided tours. Think of it as a seminar at sea with expensive wine.

The Octantis itself was built for polar cruising, and deeper ports. In some places, as in the ship's passage through Detroit earlier this year, the crew had to dock in industrial areas rather than shinier downtowns.