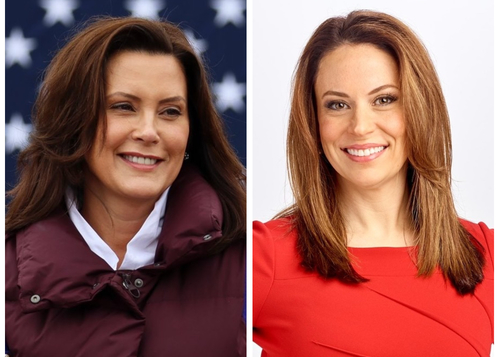 I was recently talking to a buddy about the Michigan gubernatorial candidates, and he offered a frame for viewing what was then a hypothetical Tudor Dixon-Gretchen Whitmer matchup: Tudor is the two-door to Whitmer's four-door.

My friend does not closely follow politics. It was a crass metaphor for the candidate's physiques: Tudor is a sports car, while Whitmer is a sedan. Both, he noted — as many will do publicly and privately in the weeks to come — are hot.

One might expect this sort of commentary from an immature guy friend who rarely votes. What we did not expect was that within 24 hours of Dixon's primary win, a top state GOP official who is a woman would herself make the race into a battle of the babes.

“Tudor Dixon is a much younger, smarter, and hotter than Gretchen Whitmer,” state party co-chair Meshawn Maddock reportedly said at a GOP “unity luncheon” the day after the election.

"It's true, this is going to be epic," Republican consultant Dennis Lennox replied to a tweet of the statement.

Maddock's comment was decried by dozens of Twitter users, who called it "disgusting," "a disgrace to all women," and evidence "misogyny is on the ballot."

"It does a real disservice to all women that RIGHT OUT OF THE GATE the GOP wants to treat this as a beauty pageant," State Sen. Mallory McMorrow tweeted. "CAN WE NOT."

"There are clear contrasts in this race on the issues that actually impact Michiganders’ lives. Governor Whitmer is moving Michigan forward by lowering costs for families, making record investments in education, and fighting like hell to protect the right to choose while Tudor Dixon has committed to criminalizing abortion without exceptions and gutting public schools.”

The Dixon campaign did not respond to a request for comment.