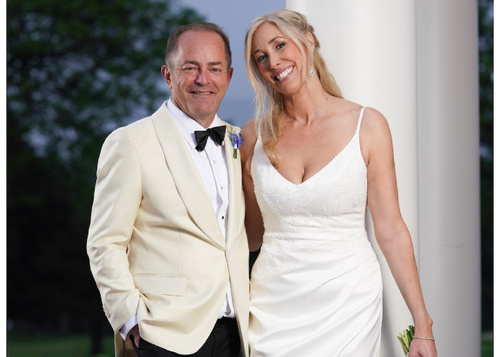 We're a little late to the party. But we just stumbled upon on a Facebook photo showing that WXYZ investigative reporter Heather Catallo has tied the knot with high-profile attorney Todd Flood, who was a special prosecutor for the Michigan Attorney General's Office for the Flint water case.

For both, it's their second marriage.

Catallo earned a degree in Broadcast Journalism from the S. I. Newhouse School of Public Communications at Syracuse University. Flood earned his law degree from the University of Toledo College of Law and  is the managing partner of Flood Law in Royal Oak. He previously worked as an assistant Wayne County Prosecutor.

In 2016, Michigan Attorney General Bill Schuette appointed Flood special prosecutor in the high-profile criminal investigation into the Flint water scandal. He gave up that post in 2019 after Dana Nessel became the new attorney general.

Flood tells Deadline Detroit the two married in May at the Detroit Golf Club.

He said they first met "a long time ago" when their paths crossed on some cases.

►Support Deadline Detroit's journalism by becoming a member or giving a one-time donation.