Lapointe: What Would Old Henry Ford Make of the 2022 Woodward Dream Cruise? We Find Out. 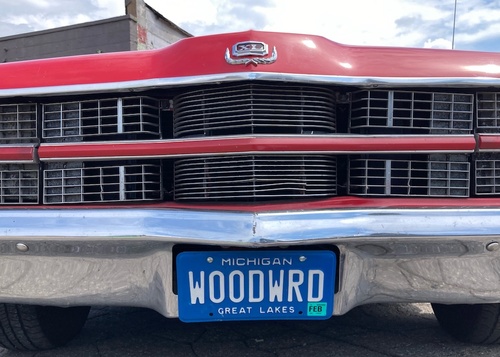 In August of 1896, Henry Ford told Thomas Edison he hoped to power his new-fangled horseless carriage by burning gasoline inside an internal combustion engine. 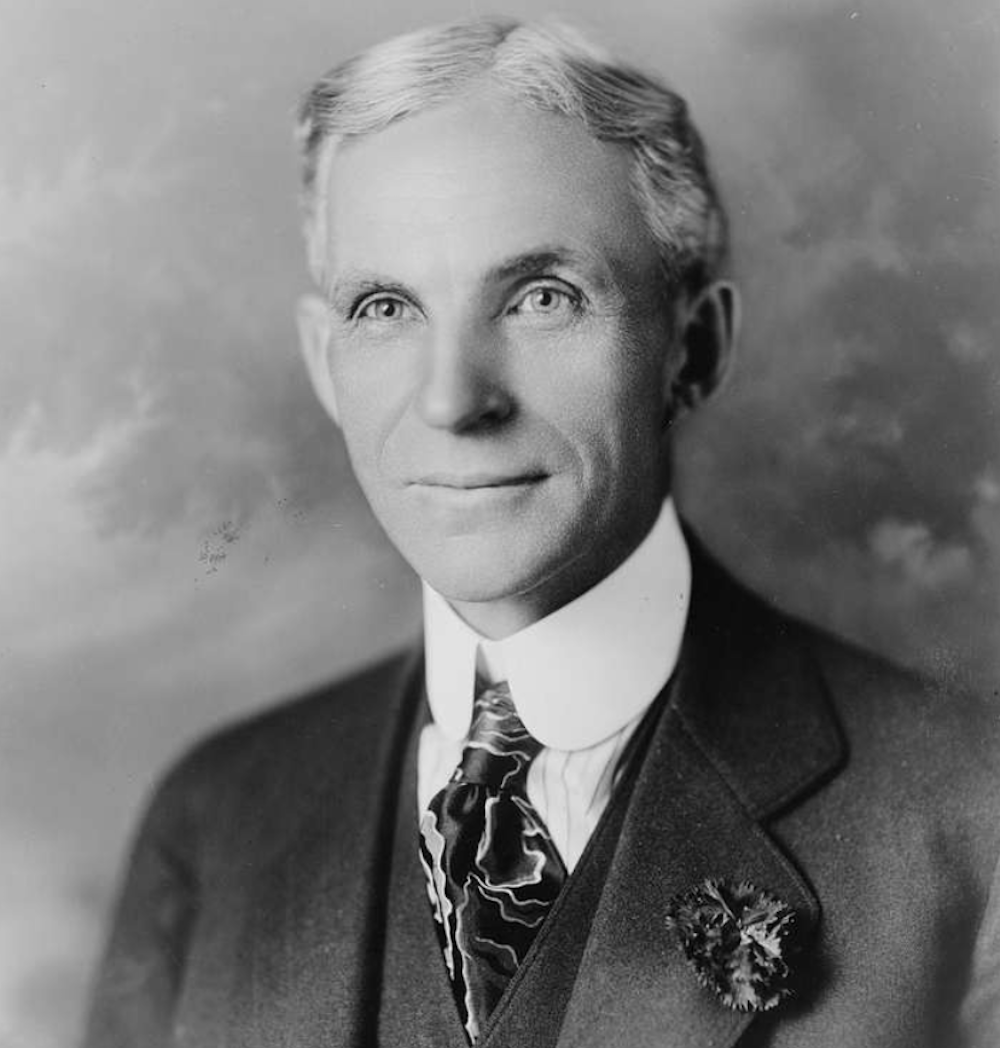 At that time, 126 years ago, the fledgling automobile industry was at a fork in the road. Having electrified and illuminated much of the nation, Edison wanted electric cars, too. Ford favored liquid fossil fuel. But Edison listened attentively to Ford, who was then the chief engineer at the Edison Illuminating Co. in Detroit before the town became known as “the Motor City.”

Ford later wrote about Edison’s reaction to his gasoline-powered car.

“He asked me no end of the details and I sketched everything for him,” Ford wrote. “ . . . When I had finished he brought his fist down on the table with a bang and said: `Young man, that’s the thing; you have it. Keep at it! Electric cars must keep near to power stations. The storage battery is too heavy . . . Your car is self-contained – it carries its own power plant . . . You have the thing. Keep at it.’”

Ford also believed in reincarnation. Born in July of 1863, Ford said he was a Civil War soldier in his previous life and had died that same month in the Battle of Gettysburg.

Because of his belief in continued life, I took Mr. Ford along with me in spirit Saturday when I time-traveled up and down Woodward Avenue – by foot and by bus, from Pontiac down through Ferndale -- for the 27th. annual Woodward Dream Cruise, sponsored by the Ford Motor Co. 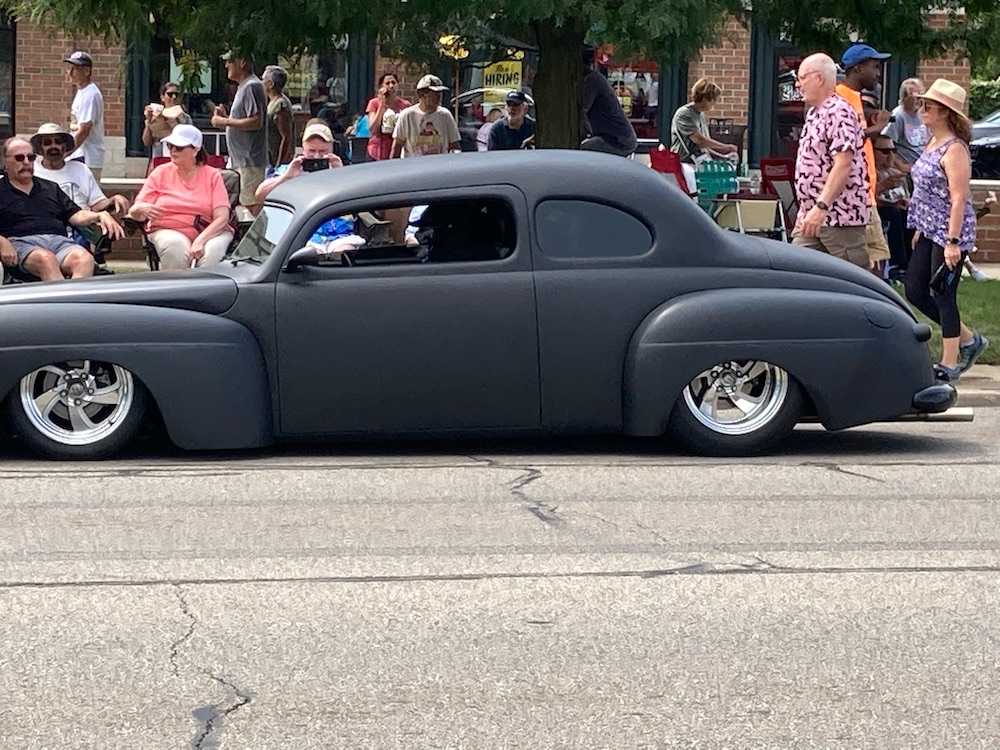 In a decade -- or two or three, maybe – most cars will use electric battery power, not gasoline. What will that mean for the Dream Cruise if people can’t get gasoline? Can you retro-fit a 21st.-century battery into a giant, black land yacht like the 4,000-pound, 1963 Buick LeSabre we saw on display?

As we walked near the curb on Woodward in Royal Oak, Mr. Ford smiled at brightly-painted colors of a 1965 Mustang (bronze), a 1957 Chevrolet Bel Air (blue and white) and a 1969 GTO (candy-apple red).

“I used to tell ‘em they could have any color . . . ” Mr. Ford said. “. . . so long as it is black,” I finished for him.
Mr. Ford seemed amused at the idling cars jammed at traffic lights, where drivers combusted $4 gallons of gas as if they had money to burn.

“Rev it up!” kids shouted from the sidewalk.

The drivers – listening and smiling through open windows --- obeyed, their motors growing in volume like mechanical jungle beasts, from purrs to growls to mighty roars.

When a guy peeled out and burned a streak of rubber, Mr. Ford seemed startled by the noise and the smell that brought cheers from the cheering jury in lawn chairs.

“Now, THAT will scare the horses,” Mr. Ford said.

“Not to worry,” I assured him. “Nobody keeps horses in cities anymore. Even the race tracks have closed.”

We walked North toward 14 Mile Road through sidewalks lined two and three deep with spectators. Young folks traveled in packs. We saw the girls go by dressed in their summer clothes; Mr. Ford frowned and declared them “immodest.” 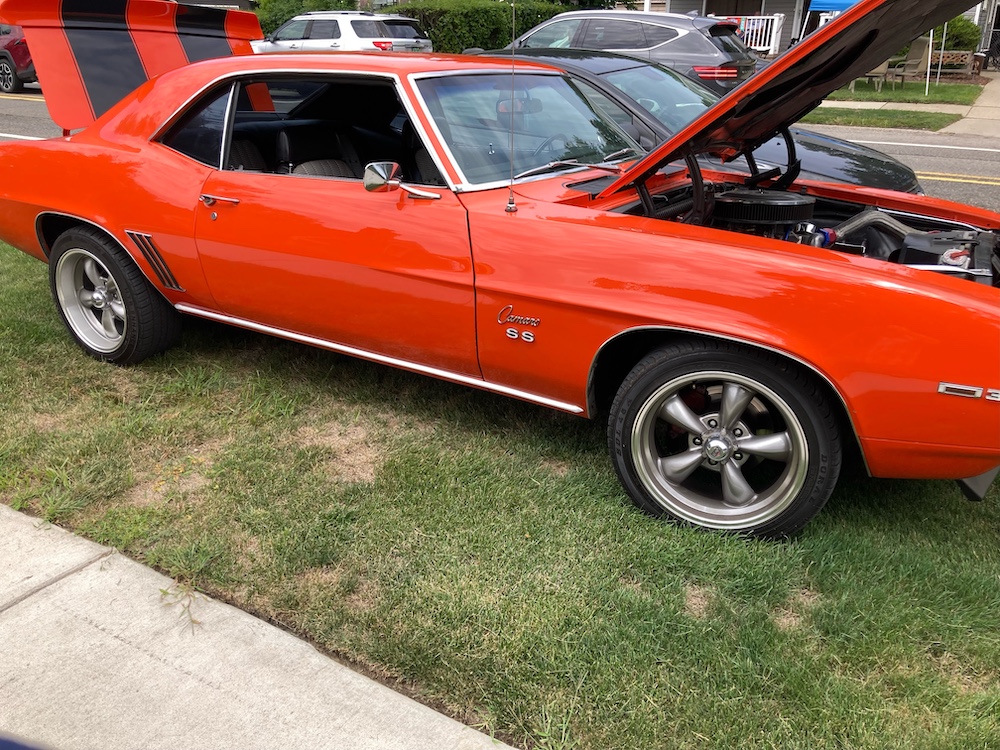 But he smiled at the brawny young lads in tee shirts that said things like “Detroit Muscle,” “Horse Power Super Power” and “Michigan Do Cool Shit.” He nodded in approval at the families strolling along the sidewalks in clusters, sometimes moving faster than the cars.

The pedestrians mingled among bicycles, baby strollers and wheelchairs. Some spectators viewed the parade of people and machines from beds of Ford 150 pickups and from tops of sedans parked on lawns. Some sat like human hood ornaments with their backs against their windshields.

Despite thousands of vehicles crawling bumper-to-bumper for many miles over many hours, there was no road rage. Police cars were a visible presence.  We saw many wastebaskets and porta-johns and little litter.

We enjoyed our walk. If you like to watch people, this is the place to be. Lots of mingling, very few drunks and thick, humid air filled with the enticing smells of grilling meat as if at a tailgate picnic outside a sports event.

And if you want to talk about cars, you can strike up a friendly conversation with just about any stranger. Following the restrictions on socializing over three years of the Covid pandemic, such spontaneous discourse feels like a welcome return to normal.

“That Galaxie was your first car? Really? What did you pay for it?”

We stopped at a row of Camaros, lined up with hoods up to show off their motors while oglers swarmed around them. Out in the traffic lanes, a car horn chorus competition began with one “Ah-WOO-guh!” and ended with what sounded like a blast from a Great Lakes freighter. 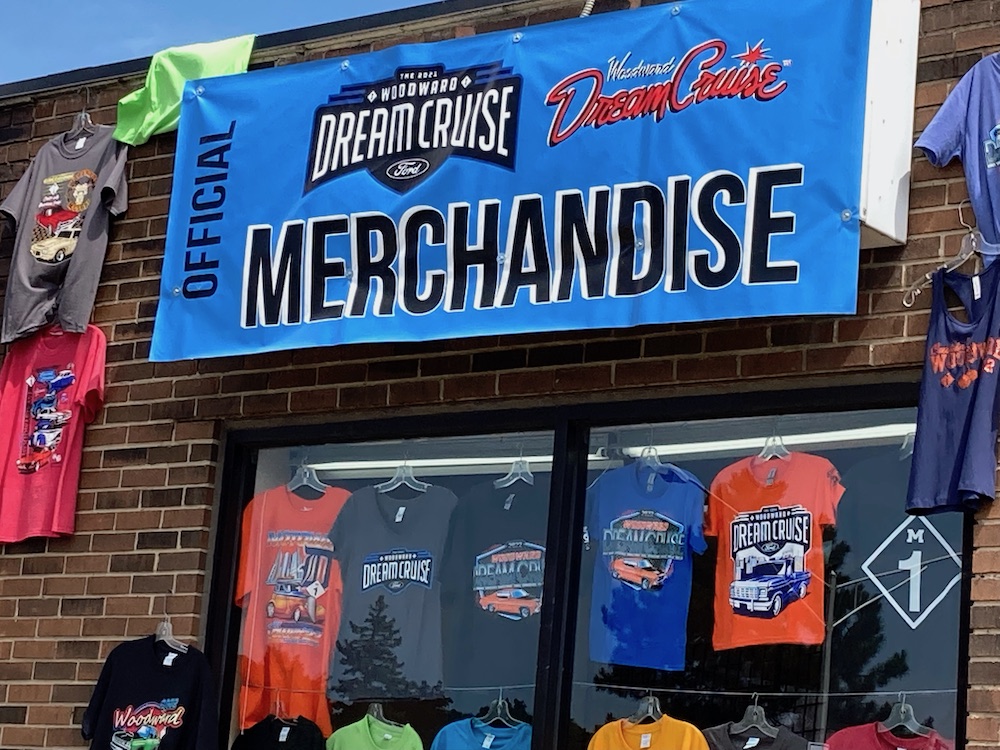 Mr. Ford did a double-take when he saw a Black guy in a Santa Claus suit go by on a motorcycle with a woman on the back, also in Christmas costume.

“This is like a county fair,” Mr. Ford said. “And these are the midway attractions.”

“I think of it as our local version of Mardi Gras,” I replied. “We don’t have a state fair here anymore.”

Speaking of old cars and summer fairs, I told Mr. Ford I saw my first demolition derby nearby at the Michigan State Fair, long ago, when the Fair was the big attraction in the late summer on Woodward Avenue at Eight Mile Road.

As the sunny skies grew cloudy and darker, we boarded a free shuttle bus that took us there, to the old State Fairgrounds site, at the southern end of the Dream Cruise course. Mr. Ford sounded surprised to hear the Dream Cruise ended at Detroit’s northern border.

“Why doesn’t it go through Detroit and down to the River?” Mr. Ford asked. “So much history there. Our first assembly line was in Highland Park. I used to live in Boston-Edison. And our first factory was on Mack Avenue.” 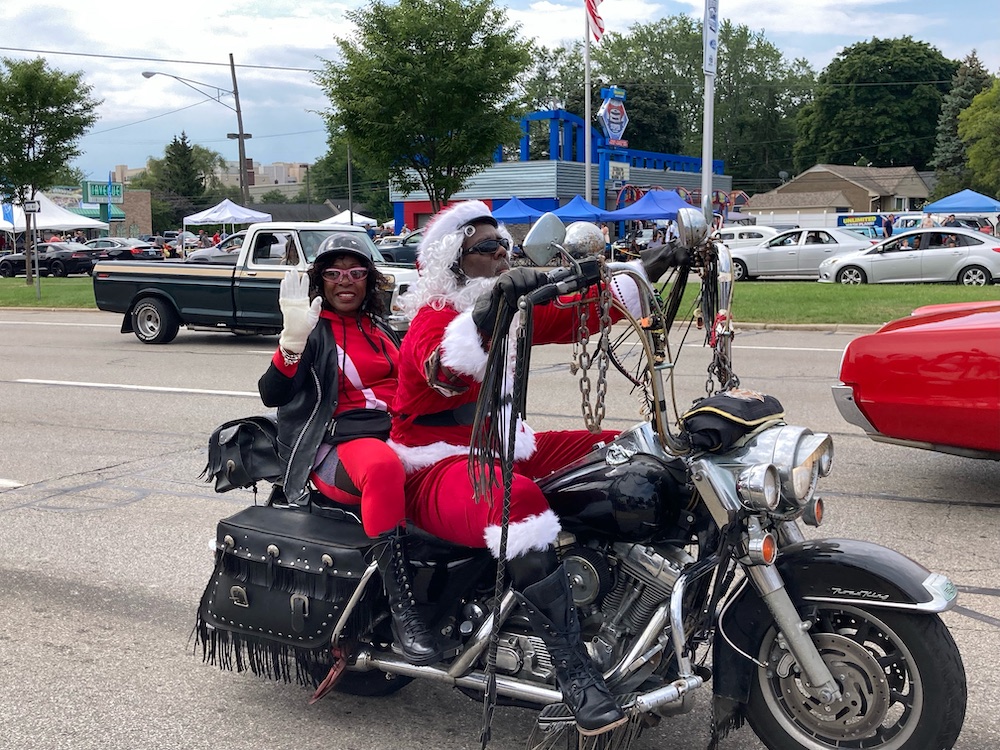 We know that, I answered, and I told him it also would look good for Detroit’s classic cars to parade across the Ford Freeway, down past the Cultural Center, through that cluster of modern sports stadiums and down into Hart Plaza.

It would add about eight miles to a 16-mile course, he said. But if Detroiters will turn out for a parade in chilly Thanksgiving weather, wouldn’t they also line the downtown streets for something as much fun as this?

But we fell silent as fat, slow rain drops began to thump off the metal roof of the bus and the driver turned on the squeaky wipers.

Outside our window, Dream Cruisers in convertibles hastily put up their rag tops and the sidewalk patio diners of Ferndale restaurants scrambled for dry shelter. Soon, a flicker of lightning flashed in the darkening sky and the roar of the car engines was replaced by the rumble of approaching thunder. 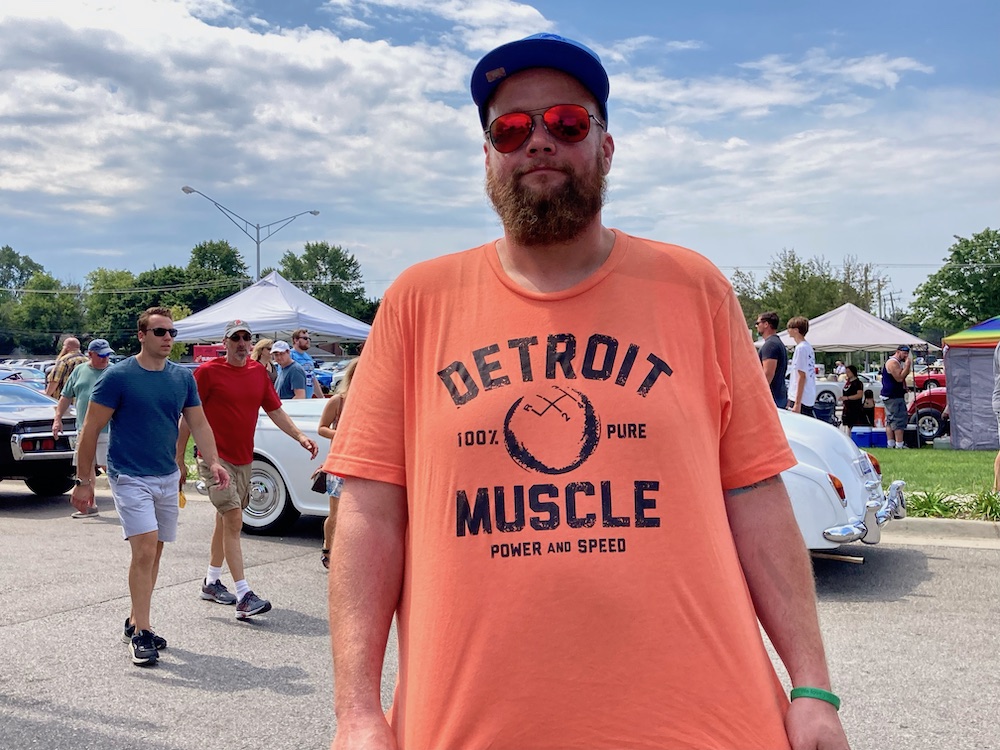 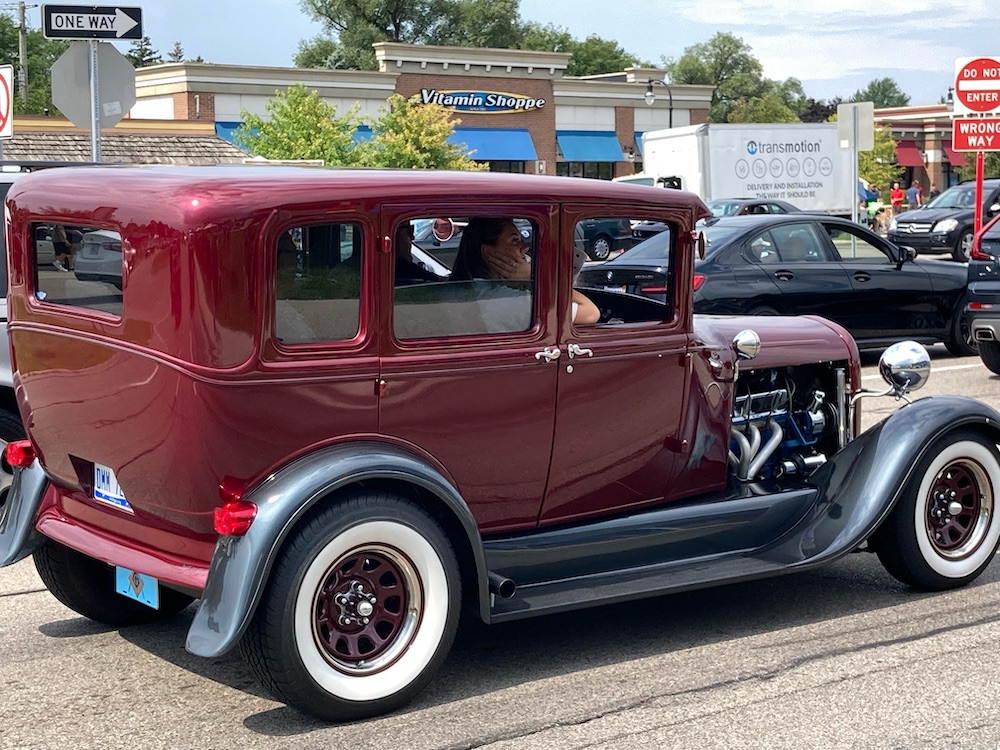 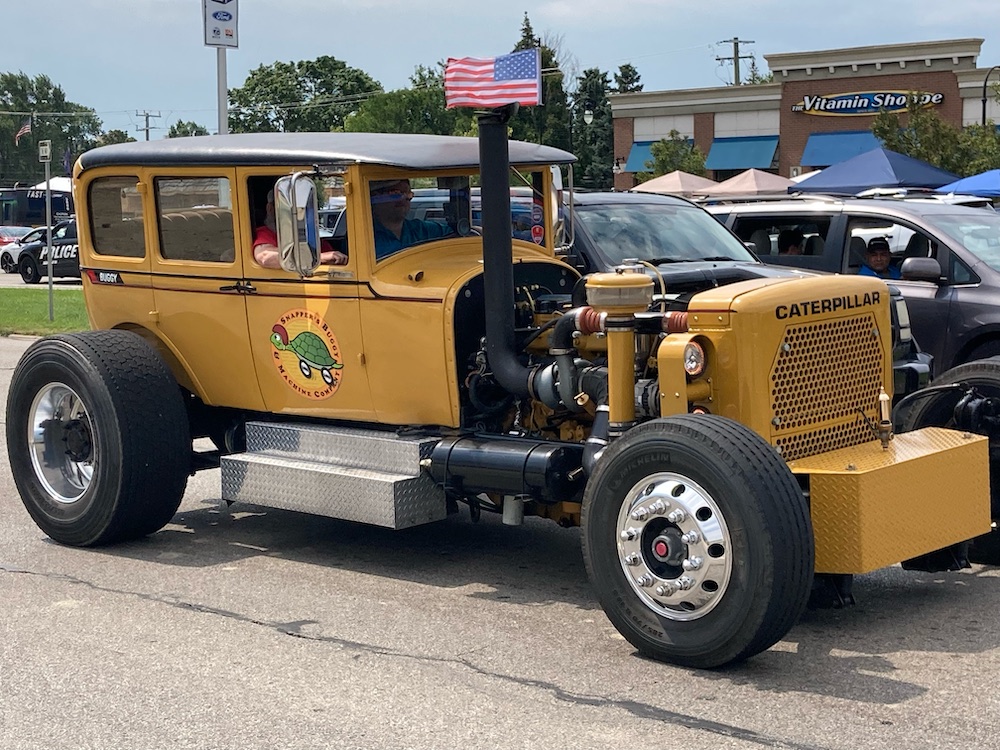 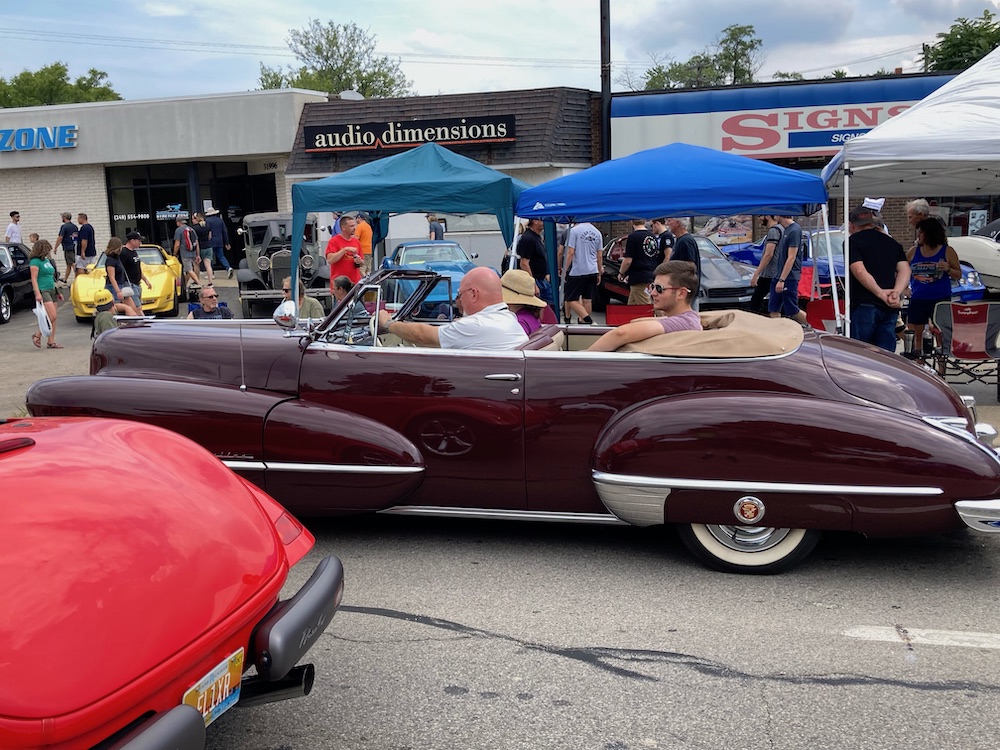