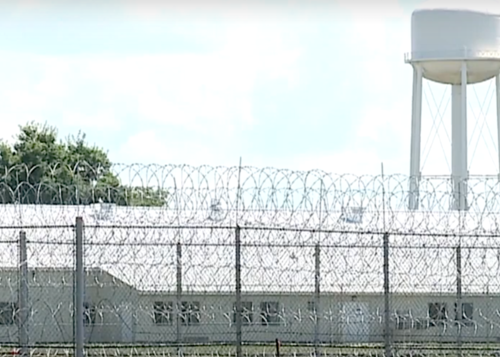 Discolored water continues to flow at a southern Michigan prison a year and a half after problems first surfaced as the result of a switch from the prison’s wells to a municipal system.

Inmates at Lakeland Correctional Facility in Coldwater tell Deadline Detroit the water is frequently yellow or brown, stoking fears of contamination. Fellow prisoners, they say, have experienced stomach problems, headaches, and rashes — symptoms they say subsided after a temporary transfer to another facility in May.

The Michigan Department of Corrections has ordered periodic water quality tests at the prison out of an “abundance of caution” since the February 2021 switch. All were negative or within the acceptable limits for lead, copper, and various bacteria, documents provided to Deadline Detroit show.

But the water has not been tested in a portion of the prison where inmates say heavy discoloration has persisted since spring, nor in the evenings, when they say it’s most common.

“We want to have some real testing done,” said Efran Parades, Jr., who is housed at the facility. “It’s not acceptable for anyone out in the real world to just be drinking brown or yellow water.”

Corrections officers, the inmates said, do not drink it, and instead bring in their own bottles and jugs.

Following Deadline Detroit’s inquiry, Michigan Department of Corrections spokesman Chris Gautz said the water would be tested in units reported to be affected after 5 p.m., likely later this week, in an effort to see “if any discoloration can be found.”

However, Gautz could not guarantee that the discolored water, specifically, would be tested, as experts who spoke with Deadline Detroit recommend. Sample collection, he said, is complicated by the fact that the technician the facility uses is located two hours away.

Only one formal complaint has been leveled since prisoners returned to Lakeland in July after a separate mold issue forced them from the facility for three months, Gautz said. That complaint was made last week, he said.

Lamont Heard, who is housed at the facility, said prisoners have been complaining for the better part of a year and a half. Requests for filters, more robust testing, and making bottled water available for purchase at the commissary have fallen on deaf ears, he said.

Lakeland switched its water source from three on-site wells to the city of Coldwater’s system after it repeatedly exceeded acceptable levels for nitrate contaminants in sewage, environmental regulators said.

Though the cause of the current discoloration is unknown, inmates say prison administrators have given them a range of excuses. Several early waves of dark water were blamed on plumbing repairs in the prison, water line repairs in the city, a flushing of the city’s water hydrants and a cleaning of its aerators. Inmates were told to run the water until clear, but said that didn’t solve the problem.

Three formal complaints filed with the Michigan Department of Environment, Great Lakes, and Energy (EGLE) this year describe the water as dark colored or brown. Two expressed safety concerns and another said the issue occurs after 6 p.m.

EGLE says it forwarded the complaints to the Michigan Department of Corrections for investigation. In response, MDOC on July 24 had the water tested for lead and copper, but the samples were pulled in the morning and early afternoon.

Water infrastructure experts Deadline Detroit spoke with drew parallels between the situation at the prison and the Flint water crisis, where a water-source switch to the corrosive Flint River caused the city’s aging pipes to leach lead into the drinking water of approximately 100,000 people.

Because residential and other commercial customers in the city of Coldwater do not appear to be experiencing the same discoloration issues as the prisoners, experts believe the problem stems from the way the municipal water interacts with the prison’s infrastructure. Potential contaminants, they said, could be as benign as iron or as dangerous as Legionella, the bacteria that causes ​​Legionnaires' disease.

But there’s no way to know without more comprehensive tests, said Nancy Love, an environmental engineering professor at the University of Michigan.

“If they’re having discoloration, it’s not acceptable to just say it meets certain standards,” she said. “A water quality engineer needs to be involved and look at the groundwater, things like pH, how corrosive it is. They should be sampling at times when they’re having these events … you can’t just brush it aside because it’s a corrections facility.”

Due to regulatory holes, MDOC — the very agency inmates charge has ignored the problem — will decide what interventions occur.

No health or environmental regulators said they had the responsibility or authority to step in. EGLE said it can only regulate the municipality’s water, while the municipality says it can’t account for what happens when its water reaches the prison. The local health department — Branch-Hillsdale-St. Joseph Community Health Agency — said water quality is regulated by EGLE and that it has received no complaints from the prison.

The Michigan Department of Health and Human Services, meanwhile, said it could only make recommendations to the prison, which it says appears to be responding appropriately. MDOC, it said, conducted additional testing that found "nothing unusual" and its health clinic had not seen the symptoms reported by inmates to Deadline Detroit.

The lack of intervention by other agencies is not surprising, said Sara Hughes, an associate professor at the University of Michigan School for Environment and Sustainability.

“The decentralized and multi-actor system (Michigan has) in place for monitoring, regulating, and managing water quality facilitates this kind of finger-pointing,” she said, adding it’s “what has made holding anyone accountable for the Flint water crisis extremely challenging.”