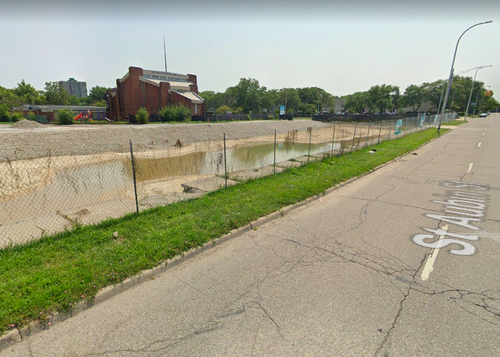 The "lake" back when it looked more like a pond in August 2021. (Photo: Google Maps)

An unexplained hole of water that's sat for a year where new apartments are supposed to go remains unexplained after attempts by Crain's to get to the bottom of it.

The city of Detroit has reportedly met with and issued a violation notice to developer Broder & Sachse over its unintended manmade lake at Lafayette and St. Aubin, the planned site for its 200-unit building, The Renato.

A nearby townhome developer is meanwhile sounding off — as much as a developer will publicly, anyway — telling Crain's the water is having a "detrimental effect on our ability to bring Pullman Parc to its completion" and "we can't represent to (a buyer) and say what's going on with that lake."

But no one knows or will say what's up with the hole and why there's water in it. Nor is there any indication of when a structure will begin to rise in its place. The project, to be developed with Detroit-based Woodborn Partners, was initially announced in 2018.

Broder & Sachse does tell Crain's it's "committed to seeing the development through."